When operating pre-production environments it is common to initialize an environment without security features enabled, in order make the development process more transparent. Cleartext network traffic can be a useful debugging tool.

To secure an existing environment, or create an environment that is secured from the beginning, you can apply security controls using the official Consul Helm chart.

In this tutorial, you will:

To complete this tutorial in your own environment you will need the following:

This tutorial was tested using:

The diagram below depicts the conceptual model of an active Consul service mesh on Kubernetes. The number of nodes varies based on your configuration, but the fundamental architecture and communication flows are represented. 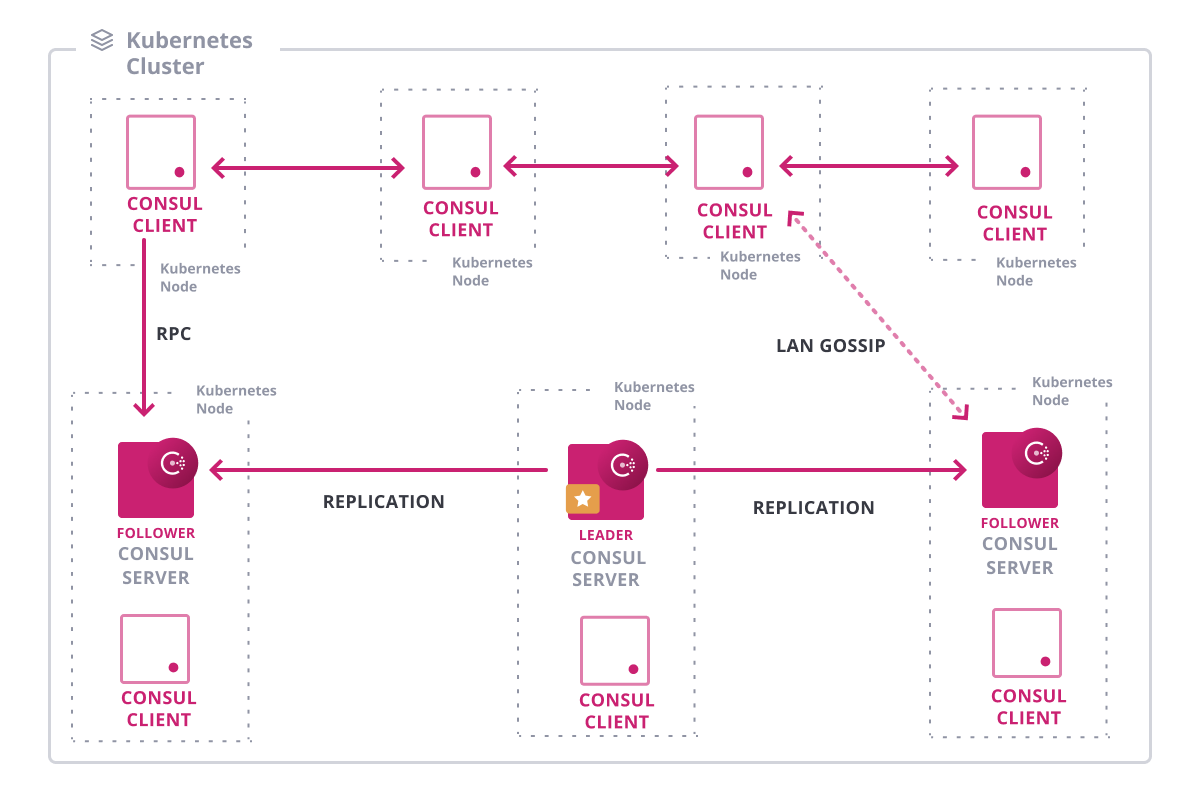 To download the Consul Helm repo issue the following command:

You should receive the following output:

Apply the chart using the following command. Note that tutorial has been passed as an argument. Helm requires a name be provided for each installation. You may name your installation anything you like, but in this tutorial tutorial is used. Make note of the name of your installation. It will be required to apply future upgrades. The install may take a minute or two to complete.

When the installation is complete, you should receive output similar to the following:

You can verify the installation was successful by reviewing the status of pods using the following command:

Once pods have a status of Running as illustrated in the following output, type CTRL-C to stop the watch.

At this point, the Consul service mesh has been installed in the Kubernetes cluster, but no security features have been enabled. This means that:

To verify that network traffic is in cleartext inspect it.

To view network traffic, connect to the Consul server container, and observe its traffic using the tcpdump program. You should now have a container named consul-server-0.

Connect to the server container with the following command:

The container images used by the Consul Helm chart are lightweight alpine images. They ship with limited tools. Issue the following commands to install tcpdump:

You should receive output similar to the following:

Now start tcpdump to view traffic to the server container. This script limits the port range to the range of ports used by Consul.

Traffic occurs rapidly. The following output is an abbreviated example.

Inspect the output and observe that the traffic is in cleartext. Note the UDP operations, these entries are the gossip protocol at work. This proves that gossip encryption is not enabled.

Next, issue a Consul CLI command to prove two things:

If the previous tcpdump process is still active, type CTRL-C to end it. This slightly modified version of the tcpdump command writes results to a log file. Start it now so that you can grep for interesting log entries later.

You will receive the following output. Traffic is now being captured in a log file rather than being output to the terminal.

Next, generate some Consul traffic in a different terminal using kubectl to exec a command against the Consul CLI on the client container. This traffic will originate from the client to the server, and will prove that RPC traffic is in cleartext.

The command succeeds, but notice that you did not pass a -token option nor did you set the CONSUL_HTTP_TOKEN environment variable. One or the other is required when ACLs are enabled. This proves that ACLs are not enabled.

Now, from the terminal session on the server container type CTRL-C to stop the tcpdump process, and then search the log file for the CLI operation with the following command:

The output will be similar to the following:

Note that you are able to see the RPC operation in cleartext. This proves that RPC traffic is not encrypted.

Enter exit to end the terminal session on the server container.

Next, upgrade your Consul service mesh installation to enable gossip encryption, TLS, and ACLs. You can upgrade the service mesh by updating your custom configuration yaml file settings, and then passing the new configuration to the helm upgrade CLI.

The following command will generate the secure-dc1.yaml file with gossip encryption, TLS, and ACLs enabled.

Notice that the file now includes a gossipEncryption stanza.

Use the following command to register a gossip encryption key as a Kubernetes secret that the helm chart can consume.

TLS is enabled by this stanza.

ACLs are enabled by this stanza.

The config file for the chart has been properly configured, and all necessary secrets have been registered with Kubernetes. Execute the following command to upgrade the installation with these changes. The upgrade may take a minute or two to complete.

Once the upgrade is complete, verify everything was successful by reviewing the status of pods using the following command:

Once all pods have a status of Running you can proceed to the next step.

Now, you can verify that gossip encryption and TLS are enabled, and that ACLs are being enforced. Otherwise, you can skip ahead to Configuring Consul intentions.

In a separate terminal, forward port 8501 from the Consul server on Kubernetes so that you can interact with the Consul CLI from the development host.

Set the CONSUL_HTTP_ADDR environment variable to use the HTTPS address/port on the development host.

Export the CA file from Kubernetes so that you can pass it to the CLI.

You now observe a list of all members of the service mesh.

The actions you performed in this section of the tutorial prove that TLS is being enforced.

The command fails with the following message:

The 403 response proves that ACLs are being enforced. You have not yet supplied an ACL token, so the command fails. The consul members command worked because consul-helm created an anonymous token and set the following policy for it:

Note: This policy is necessary for DNS, more specifically, so that the Kubernetes DNS server can make DNS queries against Consul. Queries like consul members end up working without a client specifically providing a token. If you don't want to use Consul DNS, you could disable it in the chart by setting dns.enabled to false. This will configure the ACL bootstrapping job to not create a policy for the anonymous token. However, if you want to use Consul DNS, this policy is required.

In order to perform operations that require a higher level of authority, you must provide a token with the necessary permissions. In this tutorial you will set the CONSUL_HTTP_TOKEN environment variable.

Note: You could alternately pass the token as the -token option to your CLI commands.

The consul-helm chart created several secrets during the initialization process and registered them with Kubernetes. For a list of all Kubernetes secrets issue the following command:

Notice that one of the secrets is named consul-bootstrap-acl-token. To view the Kubernetes secret, execute the following command:

You should receive output similar to the following, though this example has been abbreviated.

This secret contains the Consul ACL bootstrap token. The bootstrap token is a full access token that can perform any operation in the service mesh. In a production scenario, you should avoid using the bootstrap token, and instead create tokens with specific permissions. In this tutorial, you will use it for convenience.

The value of interest is the string in the data stanza's token field. That value is a base64 encoded string that contains the bootstrap token generated during the consul-helm ACL init process.

For this tutorial you can retrieve the value, decode it, and set it to the CONSUL_HTTP_TOKEN environment variable with the following command.

Try to start a debug session again with an ACL token set.

The command succeeds. This proves that ACLs are being enforced. Type CTRL-C to end the debug session in the terminal.

»Verify that network traffic is encrypted

Now that you have proven that ACLs are enabled, and that TLS verification is being enforced, you will prove that all gossip and RPC traffic is encrypted.

Start a shell session on the server container.

Since the containers were recycled during the helm upgrade, you will have to add tcpdump again.

Next, start tcpdump and observe the gossip traffic.

Notice that none of the traffic is in cleartext, as it was before. This proves that gossip traffic is now encrypted.

Type CTRL-C to stop the tcpdump session. Use the following command to restart tcpdump and pipe the results to a log file so that you can search for cleartext RPC traffic.

From a different terminal, try to list services with the Consul cli.

You should receive the following output.

Switch back to server, type CTRL-C to stop tcpdump, and grep log for an RPC entry

Notice that no rows were found this time. This proves that RCP traffic is now encrypted. Exit the terminal session on the server container.

To simulate an active environment you will deploy a static client service and an upstream backend service. First, issue the following command to create a file named server.yaml that will be used to create an http echo server on Kubernetes:

Next, deploy the sample backend service.

Next, create a file named client.yaml that defines the sample client service.

Next, deploy the sample client.

Finally, ensure the deployment was successful by executing the following command:

Make sure all pods/containers having a status of Running before proceeding to the next section.

With manageSystemACLs set to true, the Consul Helm chart will, by default, create a deny all intention. This means that services will not be able to communicate until an explicit intention is defined that allows them to communicate.

Issue the following command to validate that the default deny all intention is enforced.

The command exits with a non-zero exit code. This proves the intention is enforced.

Now, create an allow intention for client to server traffic.

You should received output indicating the intention was created.

Finally, validate the intention allows traffic from the client to the server. If this fails, wait a few seconds for the intention to be applied, and try again.

This proves the intention is allowing traffic from the client to the server.

In this tutorial, you enabled Consul security controls for Consul on Kubernetes using the Consul Helm chart.

Next, consider reviewing our L7 observability tutorial to learn more techniques for monitoring or debugging Consul on Kubernetes.

Back to CollectionConsul on Kubernetes
stdin: is not a tty