Version Note: The service intentions functionality described here is available only in Consul version 1.9.0 and later.

In the Secure Service Communication with Consul Service Mesh and Envoy tutorial, you deploy services into your Consul service mesh and regulate service-to-service communication.

In this tutorial, you will setup service (L7) intentions using configuration entries and configure intentions to allow only a certain path of the application to be served.

In order to deploy and test Consul service intentions, you will need the following resources deployed in a non-production environment:

Configuration Note: In order for the commands listed in the tutorial to work, you must set enable_central_service_config = true in all Consul agents’ configuration in order to have the service-defaults configuration entries automatically applied to all services in the Consul datacenter.

The diagram below shows the minimal architecture needed to demonstrate the functionality. 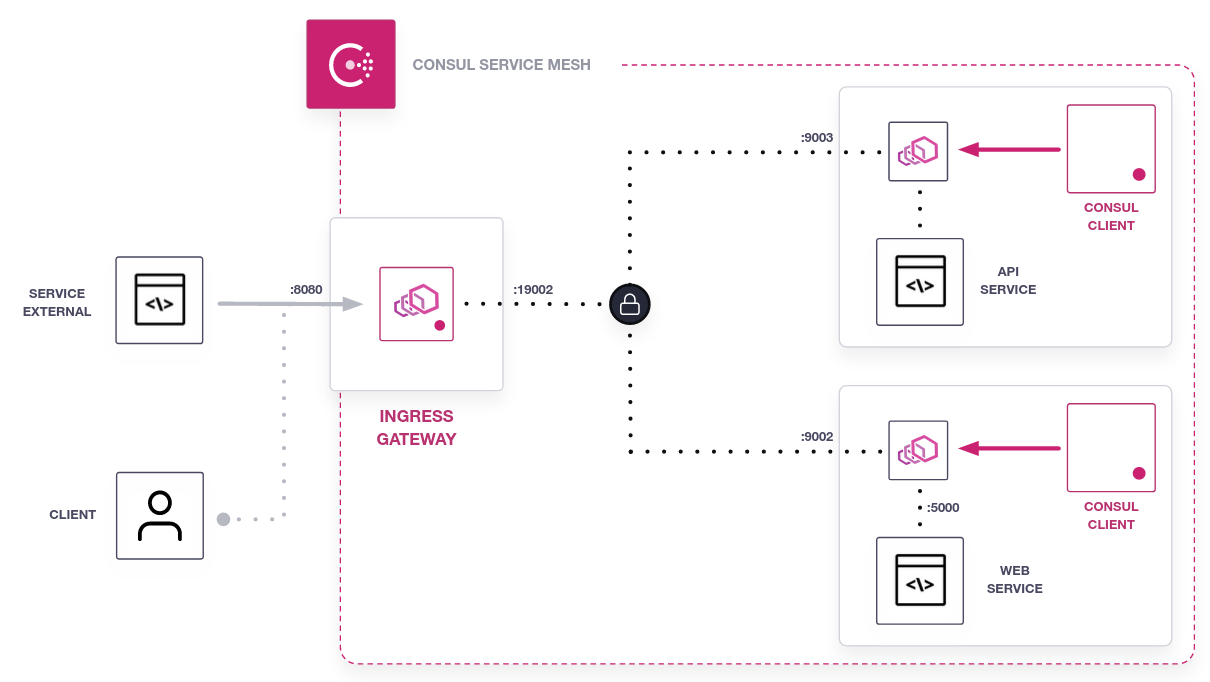 NOTE: An interactive hands-on lab is available if you do not have a Consul environment to perform the steps described in this tutorial. Click the Show Tutorial button to launch the lab experience.

Security Warning: This tutorial is not for production use. By default, the lab will install an insecure configuration of Consul.

This tutorial uses a fake-service application that simulates a multi-tier environment and offers:

Service intentions are restricted to destination services that define their protocol as HTTP. You can configure your service protocol as HTTP individually using a service-defaults config entry or globally using proxy-defaults.

Before being able to define intentions, you must define service-defaults for both the api and the web service.

Create a file named default-api.hcl with the following content:

Once you have created the file, apply the configuration to Consul.

Create a file named default-web.hcl with the following content:

Once you have created the file, apply the configuration to Consul.

For this tutorial, you will define a default intention policy that denies all service communication.

Check below to ensure you have applied the desired configuration to your environment. 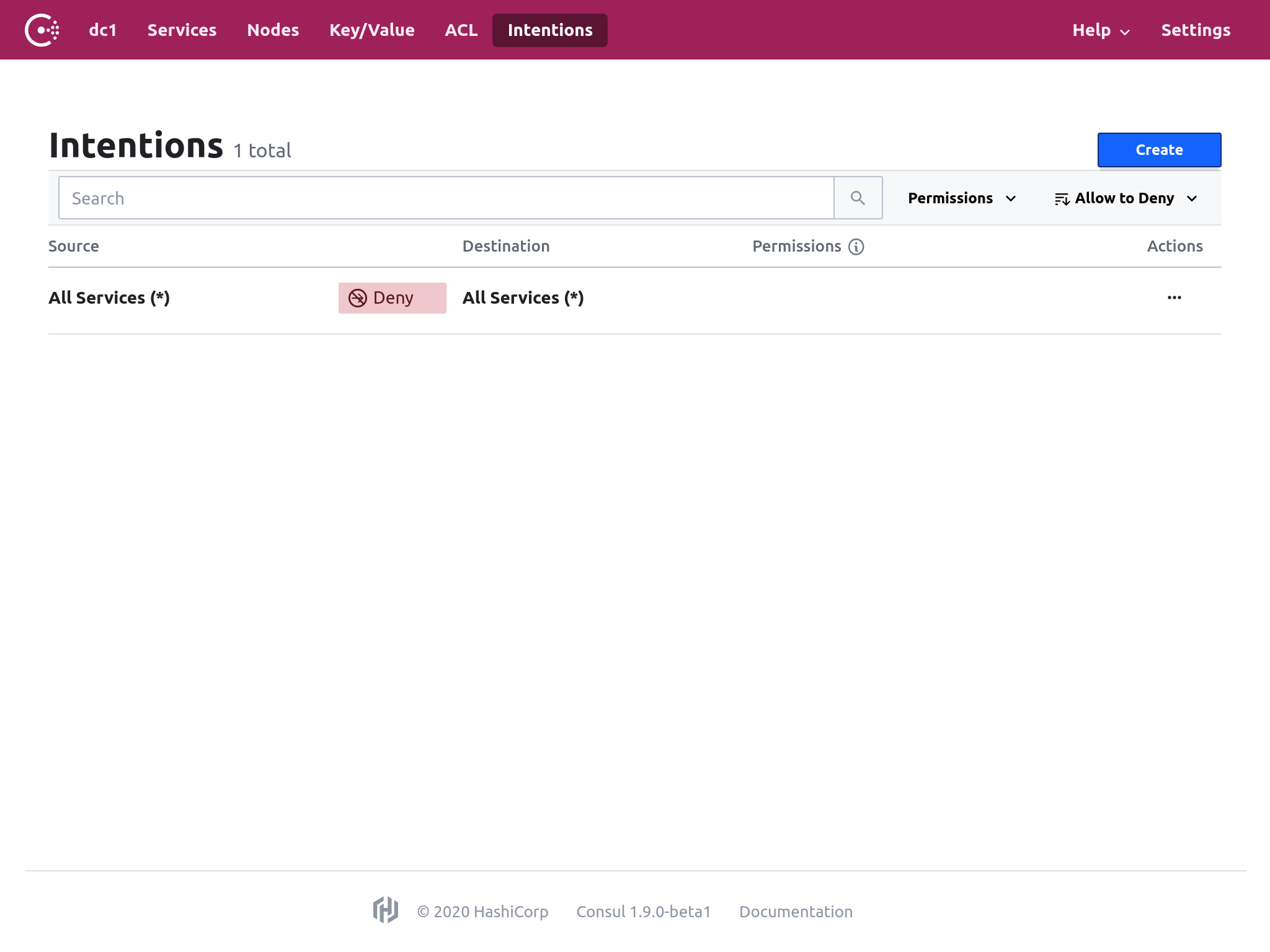 If you try connecting to the web service using the service mesh, you will not be able to connect. 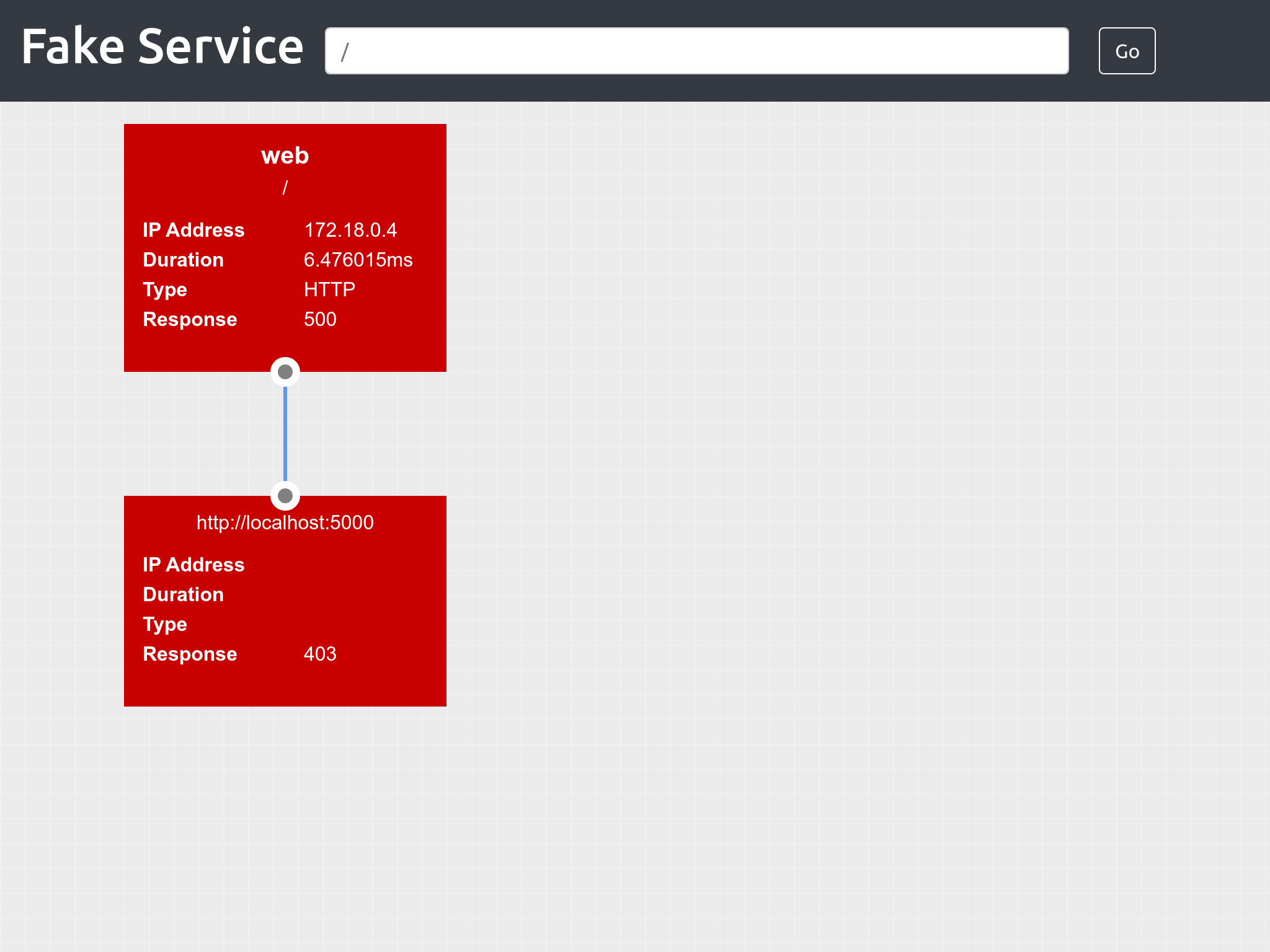 If you have Consul ACLs enabled, the default intention policy is inherited from the default ACL policy. You can skip this step by setting a default policy that denies connections, and only enable necessary connections as shown later in the tutorial.

Consul 1.9 introduces the ability to create service intentions as configuration entries that can be applied globally to many instances of a service or services.

To make the api service accessible from the web service, you will need to define an intention that permits communication between service web and service api.

Create a file named config-intentions-api.hcl with the following content:

and apply the configuration with:

Once the intention is created, you can verify it shows up in the Consul UI. 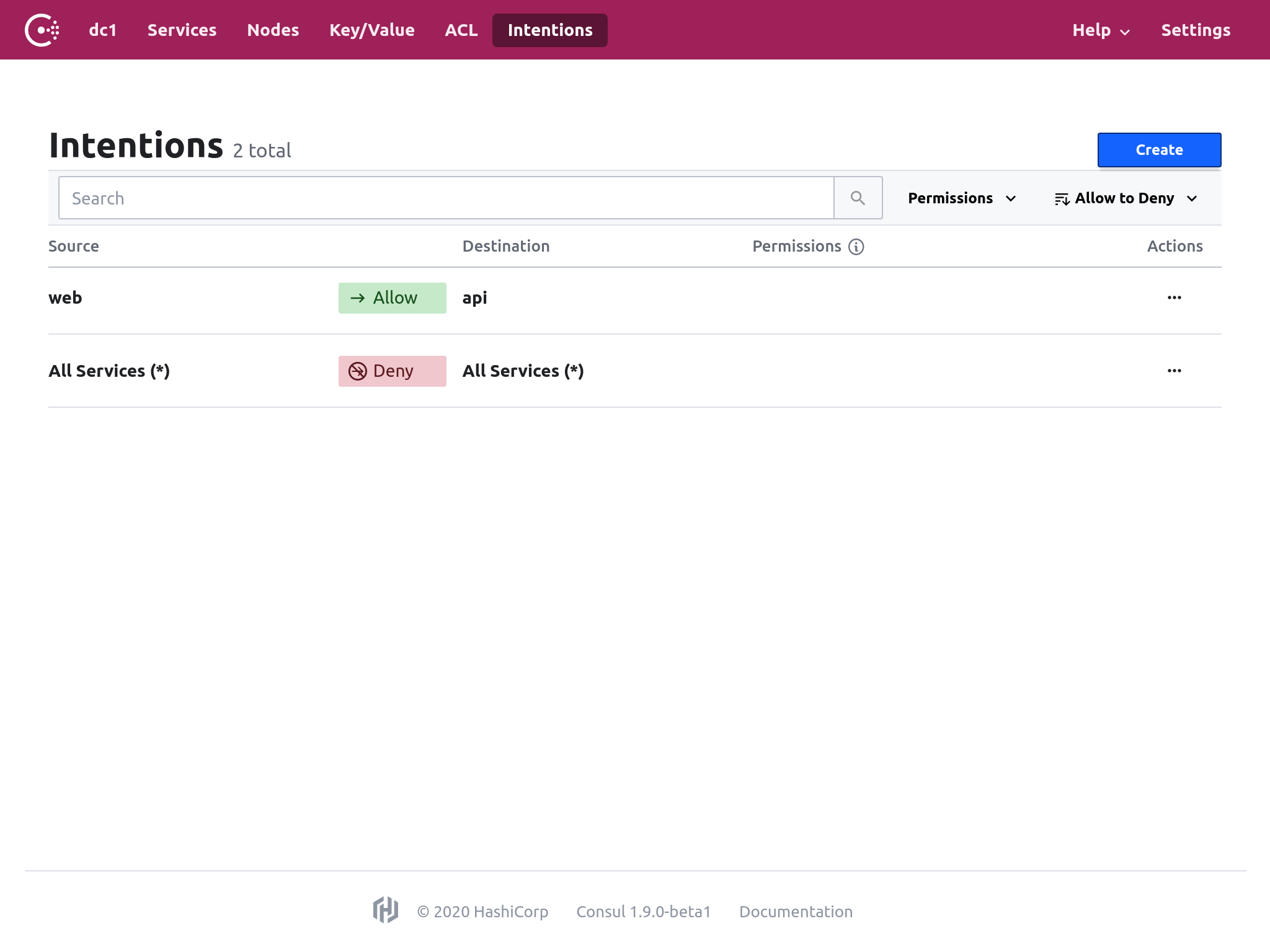 Once you have configured the intention, you can try connect to the web service. If the service is accessible on the node running it, you will see the service is now healthy: 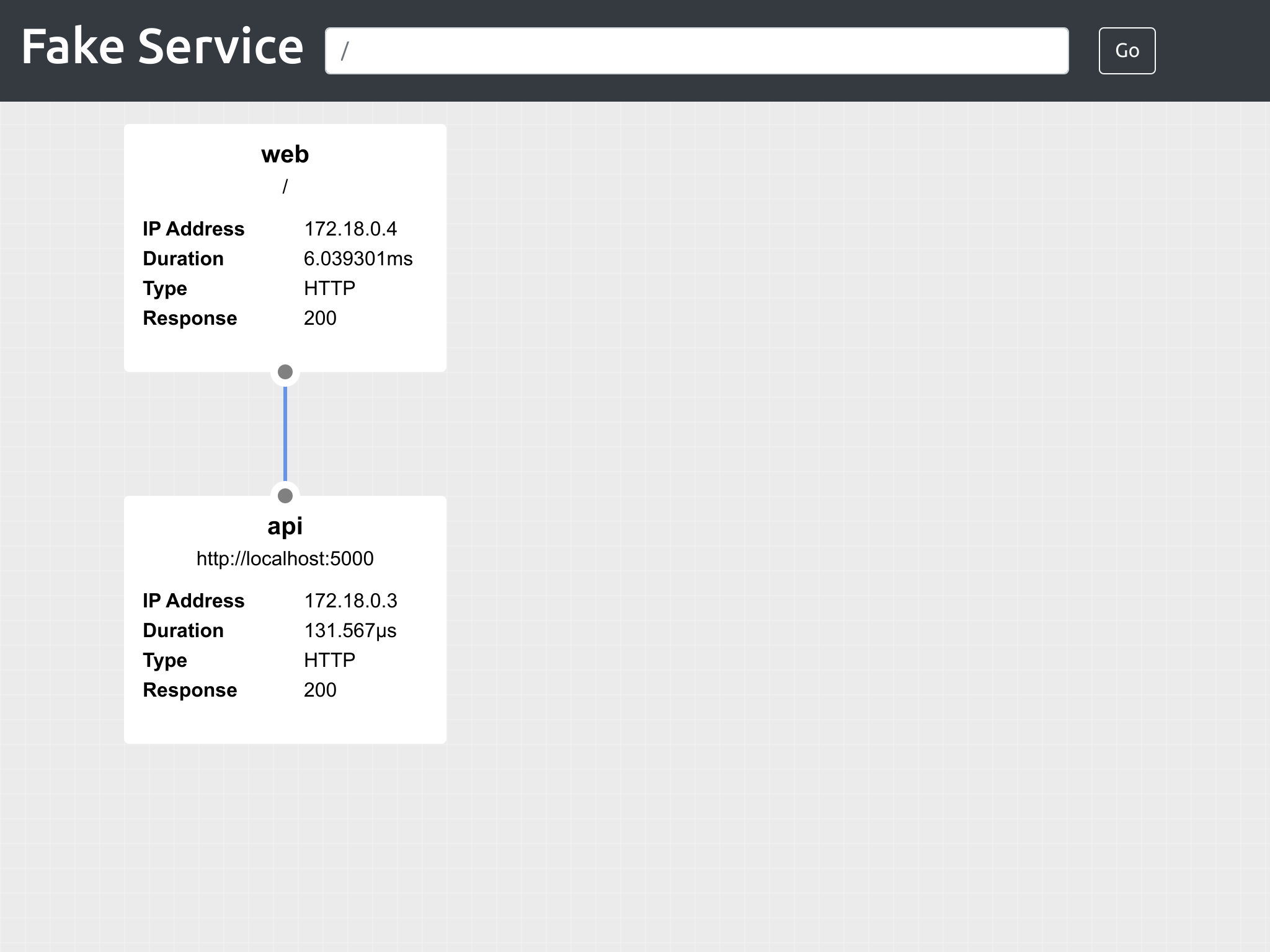 If you need to access the service from outside the service mesh, you will need to setup an ingress gateway.

Use the following configuration file to setup an ingress gateway for the web service:

This will enable an ingress gateway that will allow access to the web service on port 8080 of the gateway node.

To enable external access to the web service, you will need to setup an extra intention that will permit connections between the ingress gateway service and the web service.

In this tutorial, you will setup a more fine grained configuration where you will only allow connections from the ingress gateway on the /ui path and deny connections on the /health path.

Create a file named config-intentions-web.hcl with the following content:

and apply the configuration with:

You can use the intention match API to retrieve all relevant intentions for specific services.

For example, the following command retrieves all intentions that have web as their source:

You can also ensure that the /health path is not permitted by using curl:

That should output a permission error:

Challenge: Try to change the intentions to allow access to / path and while denying the ui path. Once you have applied the new configuration, start a new instance of the service from outside the service mesh and see if the new application is able to connect to the web service inside the Consul service mesh.

By completing this tutorial you learned more advanced concepts on how to create and manage your service (L7) intentions in Consul.

You can learn more about the other options for traffic splitting available in Consul from our Traffic Splitting for Service Deployments tutorial.

If you want to test and configure the load balancing policies available in Consul service mesh you can complete the Load Balancing for Consul Service Mesh with Envoy tutorial.

If you want to learn more on how to deploy an ingress gateway for your Consul service mesh, you can complete the Allow External Traffic Inside Your Service Mesh With Ingress Gateways tutorial.