When you deploy a new version of a service, you need a way to start using the new version without causing downtime for your end users. You can't just take the old version down and deploy the new one, because for a brief period you would cause downtime. This method runs the additional risk of being hard to roll back if there are unexpected problems with the new version of the service.

You can solve this problem by deploying the new service, making sure it works in your production environment with a small amount of traffic at first, then slowly shifting traffic over as you gain confidence (from monitoring) that it is performing as expected. Depending on the rate at which you shift the traffic and the level of monitoring you have in place, a deployment like this might be called a zero-downtime, blue-green, canary deployment, or something else.

In this tutorial you will deploy a new version of a service and shift HTTP traffic slowly to the new version.

The steps in this tutorial use Consul’s service mesh feature, Consul Connect. If you aren’t already familiar with Connect you can learn more by following Connect Services with Consul Service Mesh tutorial.

This tutorial uses a two-tiered application made of of three services: a public web service, two versions of the API service, and Consul. The Web service accepts incoming traffic and makes an upstream call to the API service. At the start of this scenario version 1 of the API service is already running in production and handling traffic. Version 2 contains some changes you will ship in a canary deployment. 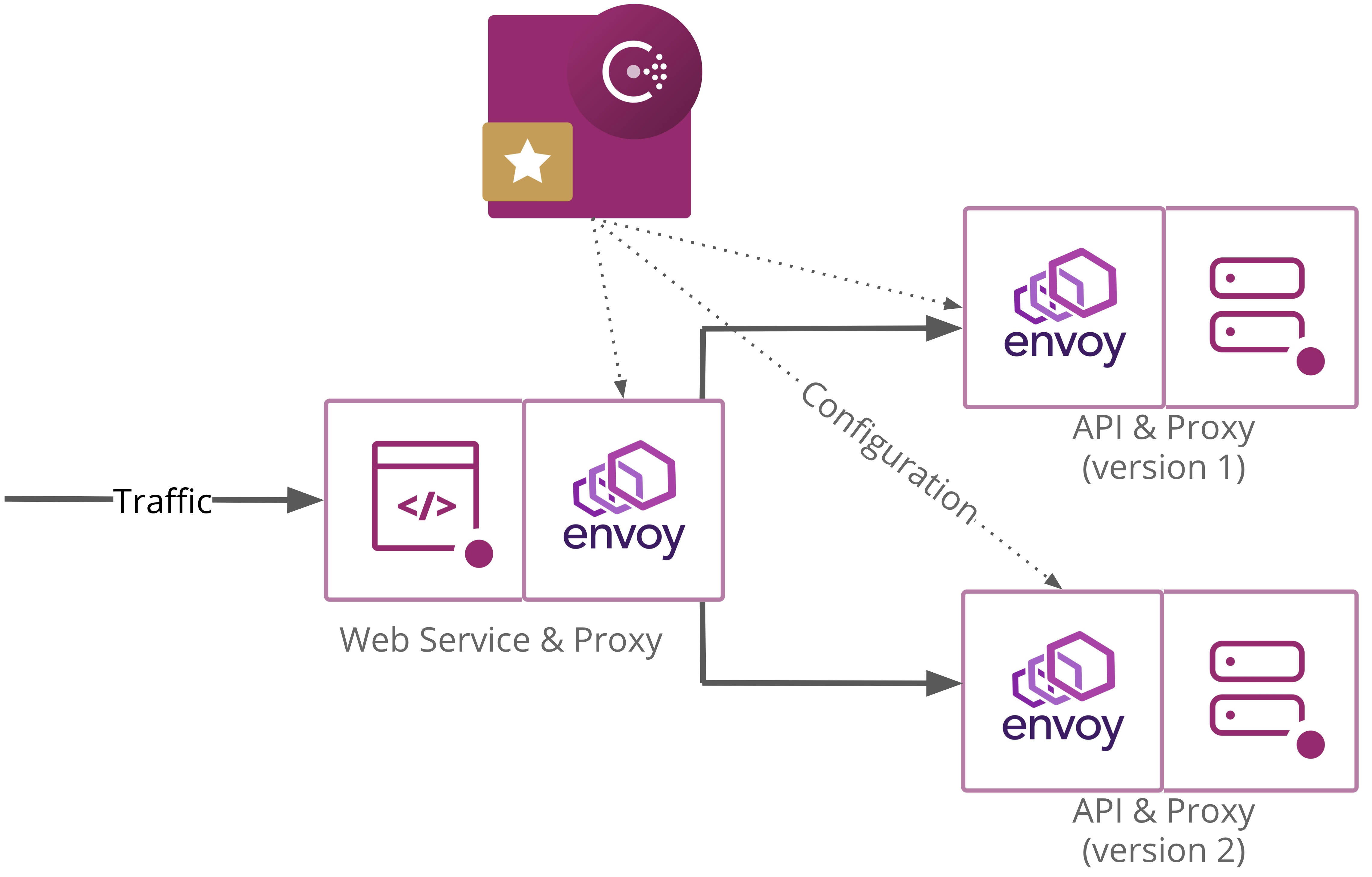 First clone the repo containing the source and examples for this tutorial.

Change directories into the cloned folder, and start the demo environment with docker-compose up. This command will run in the foreground, so you’ll need to open a new terminal window after you run it.

Consul is preconfigured to run as a single server, with all the configurations for splitting enabled.

These settings are defined in the Consul configuration file at consul_config/consul.hcl, which contains the following. 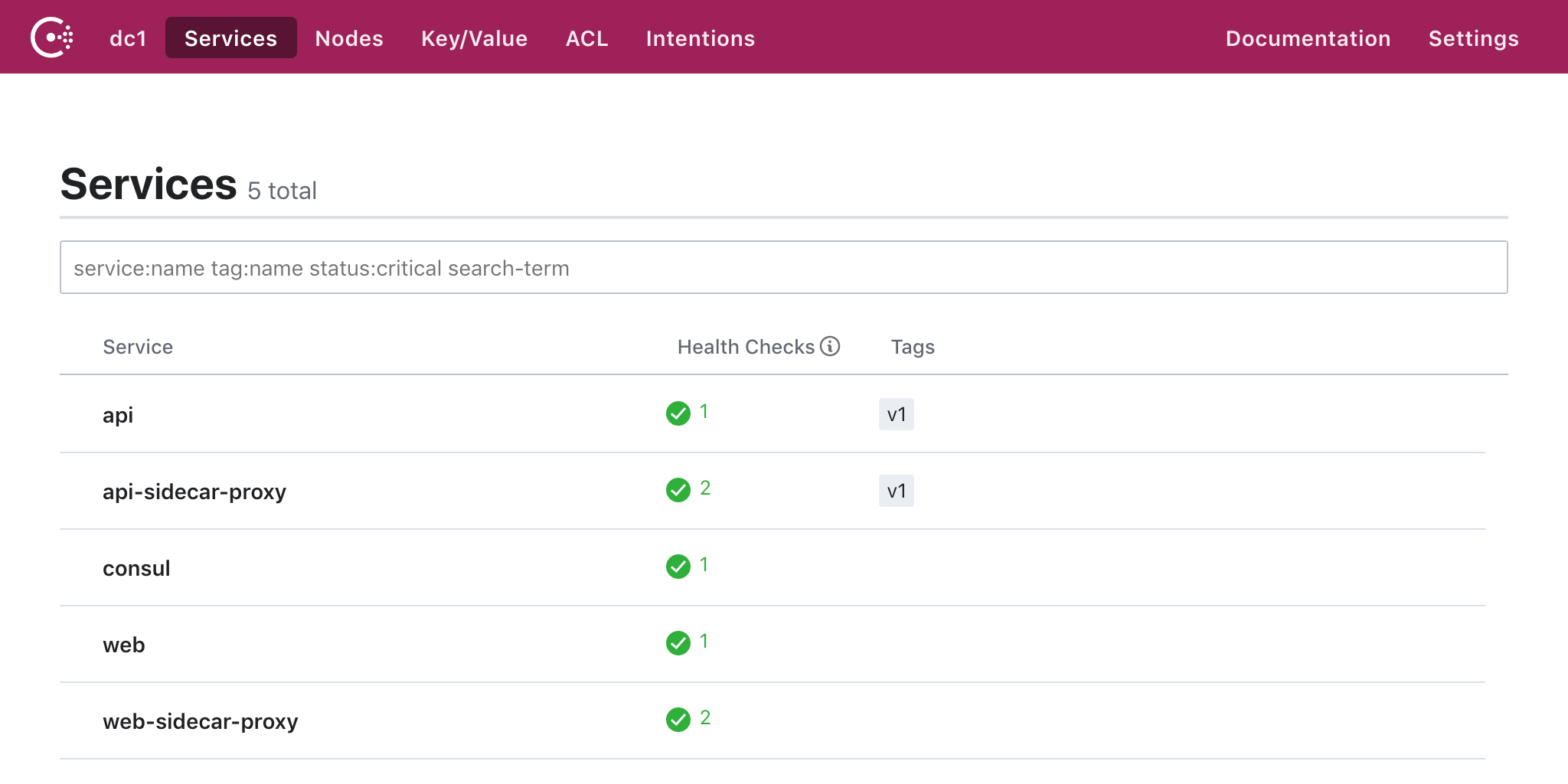 Curl the Web endpoint to make sure that the whole application is running. The Web service will get a response from version 1 of the API service.

Initially, you will want to deploy version 2 of the API service to production without sending any traffic to it, to make sure that it performs well in a new environment. Prevent traffic from flowing to version 2 when you register it, you will preemptively set up a traffic split to send 100% of your traffic to version 1 of the API service, and 0% to the not-yet-deployed version 2.

Traffic splitting requires that the upstream application uses HTTP or another supported layer 7 protocol, because splitting on a request-by-request basis. You will tell Consul that your upstream service uses HTTP by setting the protocol in a service-defaults configuration entry for the API service. This configuration is already in your demo environment at l7_config/api_service_defaults.json. It contains the following.

Find more information on service-defaults configuration entries in the documentation.

The next configuration entry you need to add is the service resolver, which allows you to define how Consul’s service discovery selects service instances for a given service name.

Service resolvers allow you to filter for subsets of services based on information in the service registration. In this example, you are going to define the subsets “v1” and “v2” for the API service, based on their registered metadata. API service version 1 in the demo is already registered with the service metadata version:1, and an optional tag, v1, to make the version number appear in the UI. When you register version 2 you will give it the metadata version:2, which Consul will use to find the right service, and optional tag v2. The name field is set to the name of the service in the Consul service catalog.

The service resolver is already in your demo environment at l7_config/api_service_resolver.json and it contains the following configuration.

Write the service resolver configuration entry using the CLI and providing the location, like in the previous example.

Find more information about service resolvers in the documentation.

Next, you’ll create a configuration entry that will split percentages of traffic to the subsets of your upstream service that you just defined. Initially, you want the splitter to send all traffic to v1 of your upstream service, which prevents any traffic from being sent to v2 when you register it. In a production scenario, this would give you time to make sure that v2 of your service is up and running as expected before sending it any real traffic.

The configuration entry for service splitting has the kind of service-splitter. Its name specifies which service that the splitter will act on. The splits field takes an array which defines the different splits; in this example, there are only two splits; however, it is possible to configure multiple sequential splits.

Each split has a weight which defines the percentage of traffic to distribute to each service subset. The total weights for all splits must equal 100. For your initial split, configure all traffic to be directed to the service subset v1.

The service splitter already exists in your demo environment at l7_config/api_service_splitter_100_0.json and contains the following configuration.

Write this configuration entry using the CLI as well.

This concludes the set up of the first stage in your deployment; you can now launch the new version of the API service without it immediately being used.

Next you’ll start version 2 of the API service, and register it with the settings that you used in the configuration entries for resolution and splitting. Start the service, register it, and start its sidecar proxy with the following command. This command will run in the foreground, so you’ll need to open a new terminal window after you run it.

Check that the service and its proxy have registered by checking for new v2 tags next to the API service and API sidecar proxies in the Consul UI.

Now that version 2 is running and registered, the next step is to gradually increase traffic to it by changing the weight of the v2 service subset in the service splitter configuration. In this example you will increase the percent of traffic destined for the the v2 service to 50%. In a production roll out you would typically set the initial percent to be much lower. You can specify percentages as low as 0.01%.

Remember; total service percent must equal 100, so in this example you will reduce the percent of the v1 subset to 50. The configuration file is already in your demo environment at l7_config/api_service_splitter_50_50.json and it contains the following.

Now that you’ve increased the percentage of traffic to v2, curl the web service again. Consul will equally distribute traffic across both of the service subsets.

Once you are confident that the new version of the service is operating correctly, you can send 100% of traffic to the version 2 subset. The configuration for a 100% split to version 2 contains the following.

Apply it with the CLI, providing the path to the configuration entry.

Now when you curl the web service again. 100% of traffic goes to the version 2 subset.

Typically in a production environment, you would now remove the version 1 service to release capacity in your datacenter. Once you remove version 1's registration from Consul you can either remove the splitter and resolver entirely, or leave them in place, removing the stanza that sends traffic to version 1, so that you can eventually deploy version 3 without it receiving any initial traffic.

Congratulations, you’ve now completed the deployment of version 2 of your service.

First you’ll stop and remove the containers created for v2 of the API service.

Then, you’ll stop and remove the containers and the network that you created in the first docker compose command.

In this tutorial, you performed canary deployments using traffic splitting and resolution.

Find out more about L7 traffic management settings in the documentation.

Back to CollectionService Mesh and Consul Connect
stdin: is not a tty