HashiCorp Vault is an identity-based secrets and encryption management system. It provides encryption services gated by authentication and authorization methods to ensure secure, auditable, and restricted access to secrets. It is used to secure, store, and tightly control access to tokens, passwords, certificates, encryption keys for protecting secrets, and other sensitive data using a UI, CLI, or HTTP API.

At the core of Vault's usage is authentication and authorization. Understanding the methods that Vault surfaces these to the client is the key to understanding how to configure and manage Vault.

Vault provides authentication to a client by the use of auth methods.

Vault provides authorization to a client by the use of policies.

If you are unfamiliar with AppRole, refer to the AppRole Pull Authentication tutorial for step-by-step instructions. Also, refer to AppRole With Terraform & Chef for more example.

This guide relies heavily on two fundamental principles for Vault: limiting both the blast-radius of an identity and the duration of authentication.

When Vault verifies an entity's identity, Vault then provides that entity with a token. The client uses this token for all subsequent interactions with Vault to prove authentication, so this token should be both handled securely and have a limited lifetime. A token should only live for as long as access to the secrets it authorizes access to are needed.

Here we refer to response-wrapped tokens introduced in version 0.8 of Vault; therefore, it is assumed that you're applying the following recommendations to Vault v0.8 or later.

The AppRole authentication method is for machine authentication to Vault. Because AppRole is designed to be flexible, it has many ways to be configured. The burden of security is on the configurator rather than a trusted third party, as is the case in other Vault auth methods.

AppRole is not a trusted third-party authenticator, but a trusted broker method. The difference is that in AppRole authentication, the onus of trust rests in a securely-managed broker system that brokers authentication between clients and Vault.

The central tenet of this security is that during the brokering of the authentication to Vault, the RoleID and SecretID are only ever together on the end-user system that needs to consume the secret.

In an AppRole authentication, there are three players:

In this scenario, the CI needs to run a job requiring some data classified as secret and stored in Vault. The CI has a master and a worker node (such as Jenkins). The worker node runs jobs on spawned container runners that are short-lived. The process here should be: 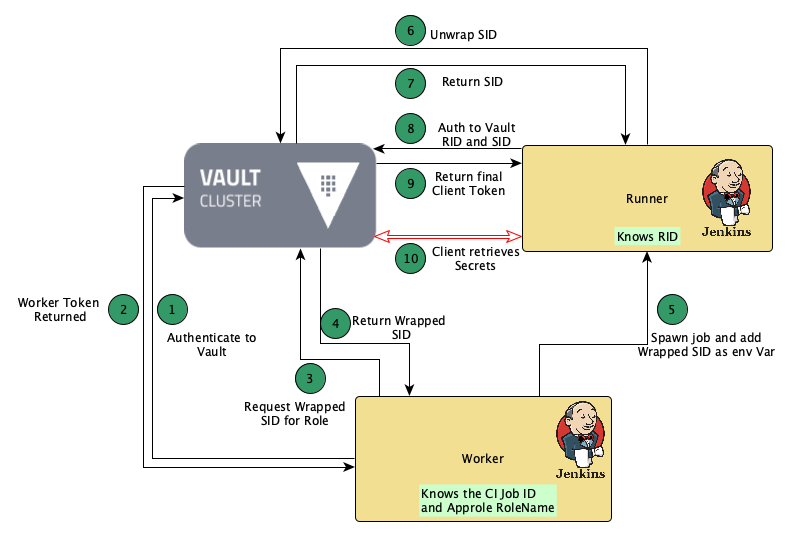 Here are more details on the more complicated steps of that process.

The CI worker will need to authenticate to Vault to retrieve wrapped SecretIDs for the AppRoles of the jobs it will spawn.

If the worker can use a platform method of authentication, then the worker should use that. Otherwise, the only option is to pre-authenticate the worker to Vault in some other way.

The worker's Vault token should be of limited scope and should only retrieve wrapped SecretIDs. Because of this the worker could be pre-seeded with a long-lived Vault token or use a hard-coded RoleID and SecretID as this would present only a minor risk.

The CI worker now needs to be able to retrieve a wrapped SecretID. This command would be something like:

Notice that the worker only needs to know the role for the job it is spawning. In the example above, that is my-role but not the RoleID.

This could be achieved by passing the wrapped token as an environment variable. Below is an example of how to do this in Jenkins:

»Runner uses RoleID and SecretID to authenticate to Vault

The runner would authenticate to Vault and it would only receive the policy to read the exact secrets it needed. It could not get anything else. An example policy would be:

As additional security measures, create the required role for the App bearing in mind the following:

Recommendation: For best security, set secret_id_num_uses to 1 use. Also, consider changing secret_id_bound_cidrs to restrict the source IP range of the connecting devices.

The CI worker could just authenticate to Vault and retrieve the secrets for the job and pass these to the runner, but this would break the first of the two best practices listed above.

The CI worker may likely have to run many different types of jobs, many of which require secrets. If you use this method, the worker would have to have the authorization (policy) to retrieve many secrets, none of which is the consumer. Additionally, if a single secret were to become compromised, then there would be no way to tie an identity to it and initiate break-glass procedures on that identity. So all secrets would have to be considered compromised.

»CI worker passes RoleID and SecretID to the runner

The worker could be authorized to Vault to retrieve the RoleId and SecretID and pass both to the runner to use. While this prevents the worker from having Vault's authorization to retrieve all secrets, it has that capability as it has both RoleID and SecretID. This is against best practice.

»CI worker passes a Vault token to the runner

The worker could be authorized to Vault to generate child tokens that have the authorization to retrieve secrets for the pipeline.

Again, this avoids authorization to Vault to retrieve secrets for the worker, but the worker will have access to the child tokens that would have authorization and so it is against best practices.

In any trusted broker situation, the broker (in this case, the Jenkins worker) must be secured and treated as a critical system. This means that users should have minimal access to it and the access should be closely monitored and audited.

In both cases, this shows that the trusted-broker workflow has likely been compromised and the event should investigated.