Let's use Waypoint to deploy applications onto Kubernetes. This tutorial will give you a very quick overview of how Waypoint works.

In order to complete this tutorial, you will need access to a running Kubernetes cluster, such as one running in a public cloud, in Docker for Desktop, or in kind. You will also need to have a local copy of the Waypoint Examples applications.

This walkthrough uses an example NodeJS application to show you how to build, deploy and release an application using Waypoint.

This example app is part of the Waypoint Examples applications. You will need a local clone of this repository on your computer to complete this walkthrough.

Clone the Waypoint Examples repository and navigate to the Kubernetes NodeJS example directory.

Change into the subdirectory for the Kubernetes project. This project uses NodeJS but the following instructions will work with any language that can be built with a cloud native buildpack.

You can use any current Kubernetes distribution with Waypoint. Set your KubeConfig with the KUBECONFIG environment variable to allow access to the cluster.

Kind is a tool for running a local Kubernetes cluster.

Create a cluster with the create command.

The create command will also configure kubectl to use the new cluster for operations.

Verify the existence of the new cluster by running get clusters.

Now that you have created a Kubernetes environment, install the Waypoint server on it with the install command. The -accept-tos flag confirms that you accept the terms of service for our application URL service.

You can verify that the cluster was successfully created by running kubectl get all. You should see the waypoint-server-0 pod.

Before you can build and deploy your application, you must initialize it with the init command.

When you initialize Waypoint for your application, Waypoint first looks for a Waypoint configuration file (waypoint.hcl) for the app in the directory.

If Waypoint cannot find the app's configuration file when you run waypoint init, Waypoint will create a starter waypoint.hcl file that you can customize for your application.

The remainder of this walkthrough uses the example NodeJS application to show how to initialize an app and then build, deploy, and release it with Waypoint.

You will now explore the waypoint.hcl file to learn more about the application's configuration.

In the waypoint-examples/kubernetes/nodejs/ directory, run the following command:

The Terminal will show the contents of the waypoint.hcl file.

The build clause defines how Waypoint will build the application.

The pack option tells Waypoint to use the most relevant Cloud Native Buildpack to build the application. Since this example application is written for NodeJS, Waypoint will use NodeJS Buildpacks.

The release stanza defines how our application will be released to our environment. For example, in the case of external Kubernetes clusters this would be where you would configure a load_balanacer on a specific port.

With these configurations in place, execute the following command in order to initialize Waypoint with this configuration.

This application is configured to use Cloud Native Buildpacks to detect the type of application running and to launch it within Kubernetes. Because Waypoint uses the appropriate buildpack to create the Dockerfile, you do not need to create the file yourself.

Once Waypoint completes a build, it stores the artifacts in either a local or remote registry.

For this example application, Waypoint will store the image in a remote Docker repository after the application is built.

You can now deploy the application to Kubernetes by running waypoint up.

TIP: It make take a few minutes to copy the image to the remote server, depending on the speed of your internet connection.

Waypoint will show the progressive status of the build, deploy, and release steps in the Terminal output. As part of the deployment workflow, Waypoint creates a preview URL for your application.

TIP: The preview URL is optional and can be disabled in the Waypoint server configuration.

Waypoint will show the result of your deployment in the Terminal, along with your specific preview URL. 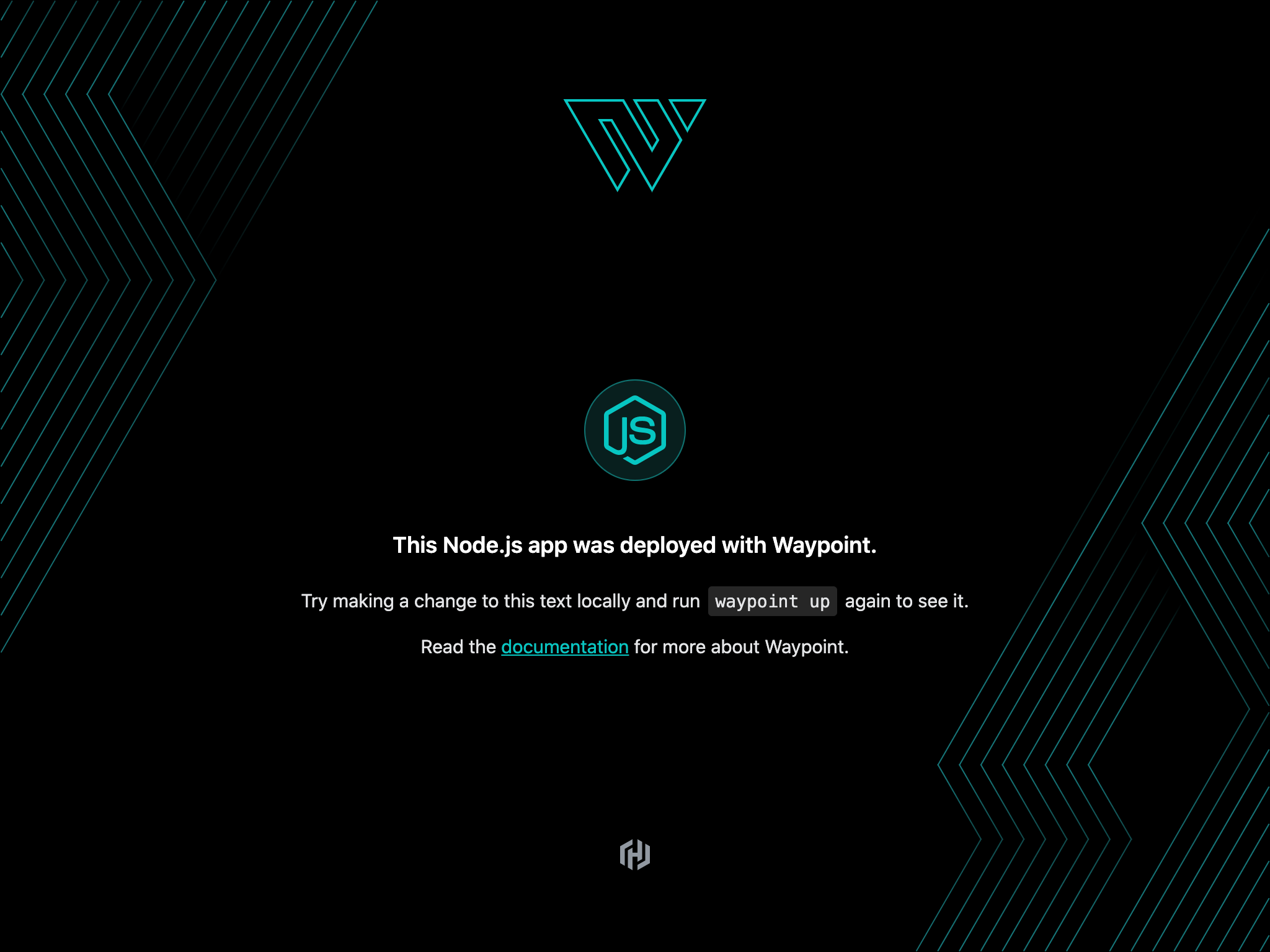 »Update and redeploy the application

Near line 18, change the text to anything that you like, such as today's date.

Waypoint has now redeployed your application.

Now, open the new Deployment URL and verify that your modified text is running in the application.