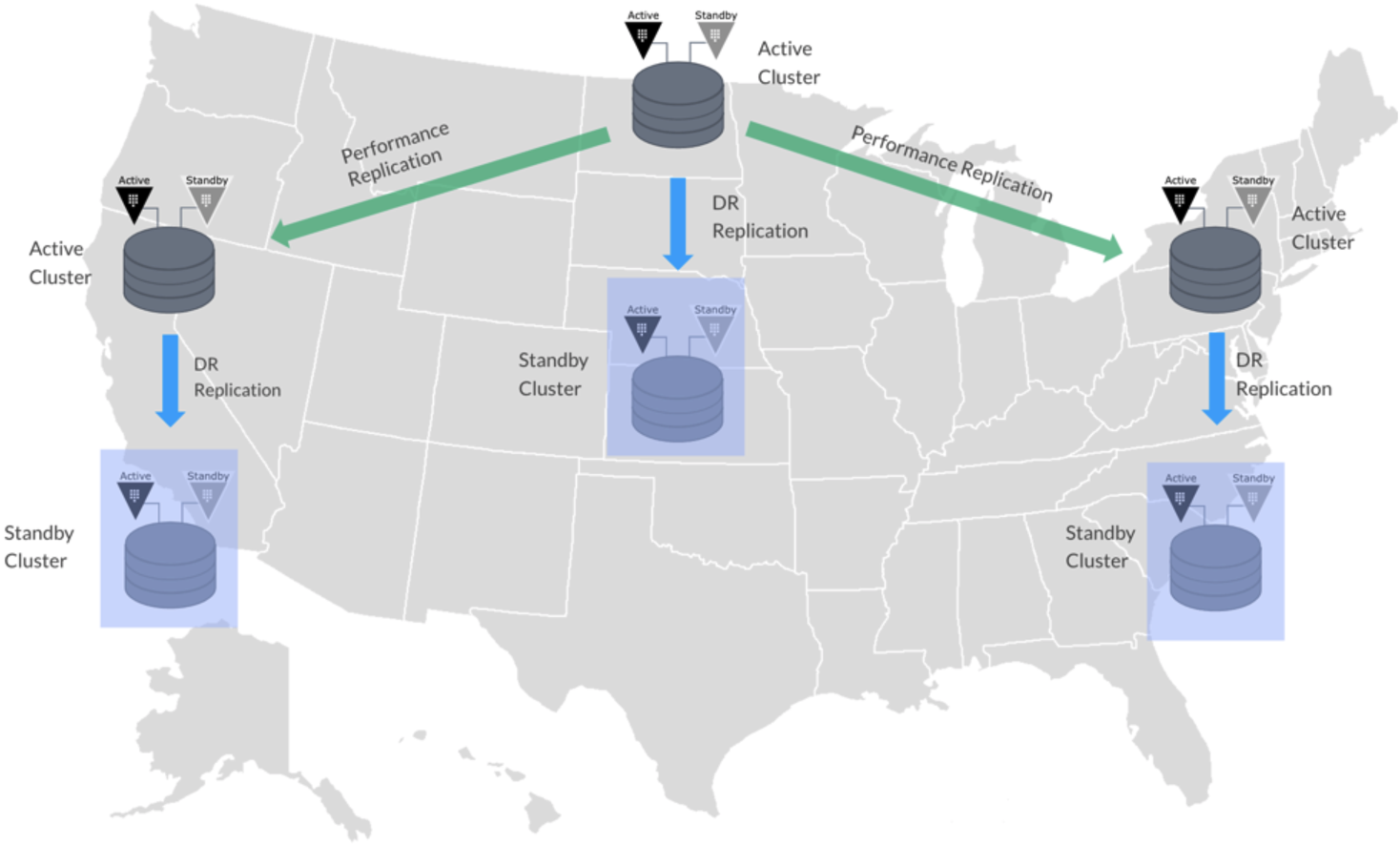 This guide focuses on monitoring and troubleshooting the replication setup.

The status endpoint provides information on WAL streaming and the Merkle Tree which are basic elements of Vault's replication system. In short, WAL streaming is used for normal ongoing replication, whereas the merkle tree and syncs are used for recovery when replication is too far out of sync to use WALs. For more detail on how these work, please review Replication Implementation Details. 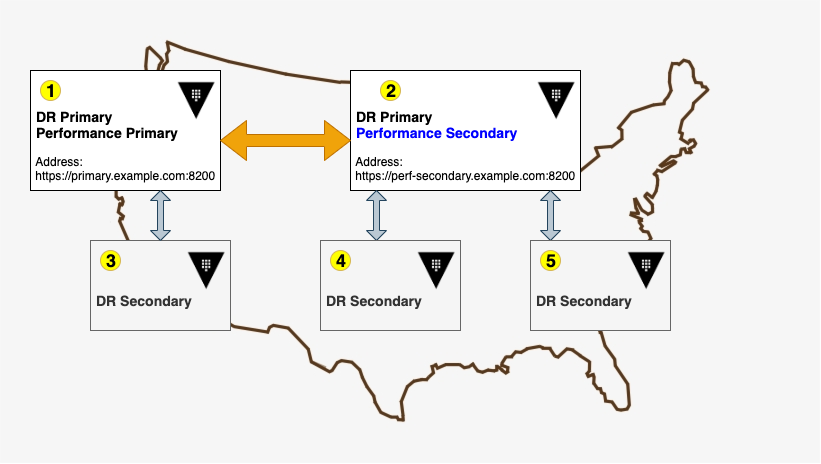 To verify the replication status of those clusters, use the sys/replication/status endpoint.

Note that you can also check the status of a specific replication type by specifying a type in the endpoint path.

These examples check only the status of performance replication by using the /v1/sys/replication/performance/status endpoint.

Likewise, you can retrieve the status of disaster replication with by using the /v1/sys/replication/dr/status endpoint.

NOTE: When you are troubleshooting Vault replication, checking the state value can give you the first clue of whether or not the primary and secondary are in sync.

»Are my DR Clusters in Sync?

It is relatively straightforward to tell if DR clusters are in sync since all data is replicated.

When the clusters are fully in sync, you can expect to observe:

»Are my Performance Clusters in Sync?

Performance replication only replicates a subset of data, so checking to make sure the clusters are in sync is a bit more involved.

Most importantly, the last_wal and last_remote_wal values are NOT always the same for performance replication. This is because the last_wal on the primary tracks all of its WALs, not only the data that is being replicated. (Remember not everything gets replicated to the secondary. For example, tokens.) However, they should become the same momentarily after you write a replicated piece of data to the cluster since the last_wal written to the primary should be the piece of data and the last_remote_wal that the secondary learns via WAL streaming would be the same WAL.

With Vault version 1.4.0 and higher you can observe the last WAL shipped to the secondary by the primary with the last_performance_wal field as part of replication status output on the primary. You can compare this value to the last_remote_wal value on a secondary to determine how far behind it is from the primary.

When the clusters are fully in sync, you can expect to observe:

Cluster 2 is a DR primary cluster and a Performance secondary cluster; therefore, its mode for dr is set to "primary"; however, for performance replication, it's set to "secondary". Notice that the secondary displays last_remote_wal rather than last_wal and its state is stream-wals.

The secondary's merkle_root should generally match the merkle_root of its primary. If that is off, you can write a test piece of replicated data to the performance primary and then check to make sure the last_wal on the primary matches (or almost matches) the last_remote_wal on the secondary right afterwards.

Also, you can check the replication status via Web UI: 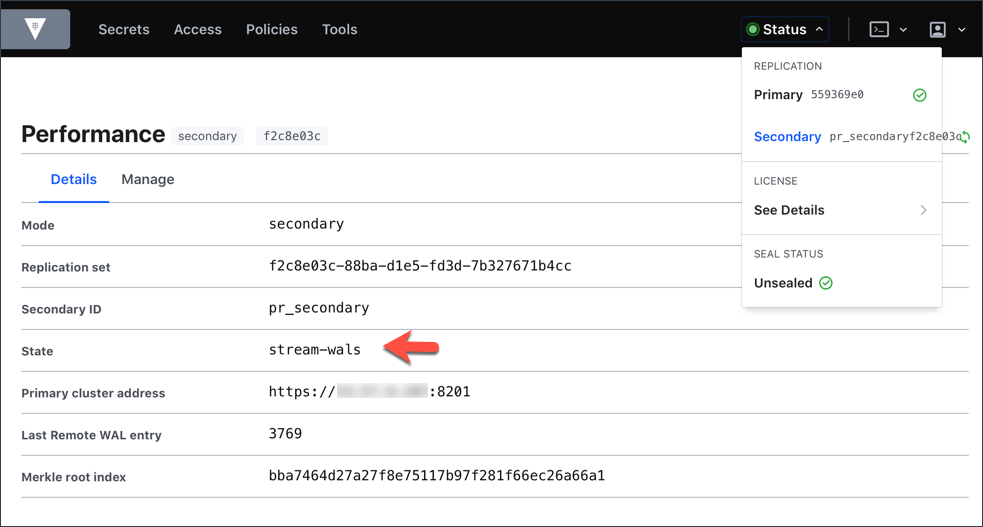 Cluster 3 is a DR secondary of cluster 1; therefore, its list of known_primary_cluster_addrs should include the cluster address of each node in cluster 1 (or a load balancer that will direct it there).

The DR Secondary must be kept synchronized with its DR primary. The last_wal of primary and last_remote_wal of secondary should be the same (or nearly the same with a little latency introduced by the network).

Cluster 4 is a DR secondary of cluster 2; as in the example for cluster 3, the last_wal of primary and last_remote_wal of secondary should be the same (or nearly the same with a little latency introduced by the network).

Cluster 5 is another DR secondary of cluster 2; in this contrived example, there was a problem with the cluster 5 host and it is now behind on replication with its primary (cluster 2).

Its merkle-root value does not match the primary and you will notice that it has values for both sync_progress and sync_total_keys indicating that at the time of the status query, 512 of 740 conflicting keys had been resolved.

Provided that all keys are successfully resolved, this secondary should return to the stream-wals state.

If your platform of choice is AWS, use the Classic Load Balancer (ELB) or Network Load Balancer (NLB) rather than Application Load Balancer (ALB). ALB requires the connection to be terminated and does not support TCP pass through. Therefore, if you are trying to use an ALB for replication traffic, you will run into issues.

If needed, set the primary_cluster_addr to override the cluster address value for replication when you enable the primary.

Write-Ahead Logs (WALs) are replayed at startup as well as during a reindex. At startup, the WAL replay is completely blocking of incoming requests (no writes or reads).

During a reindex, the behavior depends on the Vault version:

To keep the replicated data consistent across the primary and secondary, Vault maintains Merkle trees. If replication is in a bad state or data has been removed from the storage backend without Vault's knowledge, you can trigger reindexing of the Merkle tree via the /sys/replication/reindex endpoint. Reindex replication process can restore the potentially out-of-sync Merkle tree from the underlying storage so that the tree reflects the correct state of all encrypted secrets.

This is a powerful tool in a situation where unintentional loss of index records occurred.

NOTE: The time it takes to reindex depends on the number and size of objects in the data store.

This section explains some of the key metrics to look for that are specific to Vault Replication.

For a full list of Vault telemetry, refer to the Vault documentation.

It is important to collect the storage backend (Consul) telemetry to monitor the overall health of your Vault cluster. Refer to the Vault Cluster Monitoring guide for more detail.

The WAL is purged every few seconds by a garbage collector, but if Vault is under heavy load, the WAL may start to grow, putting a lot of pressure on the storage backend (Consul). To detect back pressure from a slow storage backend, monitor the vault.wal_flushready and vault.wal_persistwals metrics.

It is recommended to explicitly set Vault's HA parameters in your Vault configuration file. Often, it is not necessary to configure api_addr and cluster_addr when using Consul as Vault's storage backend as Consul will attempt to automatically discover and advertise the address of the active Vault nodes. However, when you have a load balancer in front of Vault, it is necessary to explicitly set these parameter values (and you typically have a load balancer in larger deployment).

This is particularly important when you have multiple listeners and plan to setup Vault replications.

Consider a scenario where the performance primary (cluster 1) has two performance secondaries (clusters 2 and 5).

When an unexpected event causes cluster 1 to become inoperative, you would need to promote one of the performance secondaries to be the new primary. At the same time, cluster 3 needs to be promoted to be DR primary.

When you update the replication primary:

Some other scenarios where you may need to use the update-primary endpoint are:

Previous
Troubleshooting Vault
Next
Vault Cluster Monitoring
On This Page